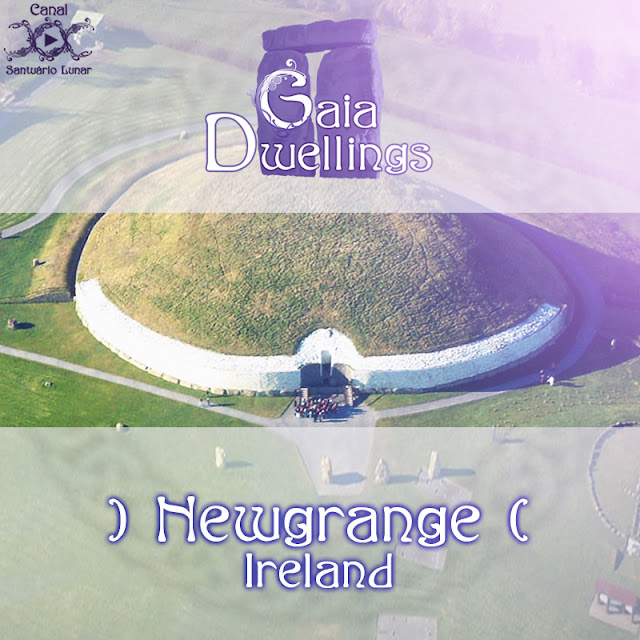 The post today in Gaia Dwellings section is about the amazing pagan temple Newgrange in Ireland.

Located in the Boyne River valley in Ireland, Newgrange catches everyone’s attention for its incredible architecture. Surrounded by 97 stones, we can notice several spirals, a symbol of the Triple Goddess, embedded in several stones. The stone placed in the entrance is the one of greater prominence. Another feature that makes Newgrange special is its alignment with celestial events and the Wheel of the Year. In the same way we get to know the exact position of the sun during Solstices and Equinoxes at Stonehenge, here in Newgrange, during the Winter Solstice (Yule) sunlight enters perfectly through a hole located above the entrance of the tunnel and illuminates the entire central region of the temple. Visits during Yule are made by lottery!Newgrange is 85 meters in diameter and 13.5 meters high. The main hall is 19 meters deep and at the end of it there are three alcoves. Once again we notice the triple nature of the monument. From the outside, the wall is lined with white quartz stones that glisten with sunlight. Newgrange was built 5200 years ago. It is older than Stonehenge and the Pyramids of Giza, for example! It was initially classified by archaeologists as a passing tomb, but today it is accepted as a pagan temple.According to Celtic mythology, Newgrange was built by the Danu Goddess People (Tuatha Dé Danann), which includes Goddesses, Gods and heroes like Brigid, Morrigan, Lugh and others, to be the tomb of God Dagda. Some texts suggest that Newgrange was built by Dagda himself as a gift to his three children.

Newgrange is part of Brú na Bóinne alongside Knowth and Dowth.

For more information on Newgrange, how to get there and more photos, access http://www.newgrange.com/

Have you been to Newgrange? Did you feel any different energy? Send your photos and share with us your experiences )O(

I’m Daniel, Pagan and Witch. I created Santuário Lunar to help spreading the Goddess’s magic and her manifestations. I also created Trismegistia to offer pagan music with New Age style.

Ask the Goddess an advice!

Your browsing is safe!

Scroll back to top